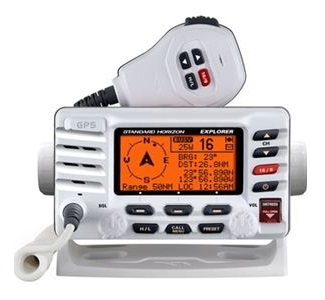 A VHF radio is not required safety equipment on a pleasure craft, however, you would be foolish not to have a VHF radio installed on your sailboat if you intend on sailing on any large sized bodies of water.

A VHF radio is your lifeline to contact the Coast Guard or other boaters in distress or urgent situations or to offer assistance. It also keeps you informed of hazards to navigation and weather and sea conditions.

You may use your VHF marine radio for:

In Canada any operator of a VHF, MF or SSB radio must have a Radio Operators Certificate – Maritime (ROC-M). See: Sailing Lessons – ROC-M

It is important that you and any of your crew or passengers be instructed in the proper use of the VHF radio in emergent situations.

Distress calls are made on Channel 16 and take priority over all other radio transmissions. If you hear a distress call, maintain radio silence unless you are able to offer assistance or until the distress situation has ended. Only make a distress call when:

Cancellation of a radio distress: Once a rescue has been taken place and the distress situation no longer exists, it is important to notify other vessels that they can resume normal radio transmission. Typically the Coast Guard will make the following transmission.

Seelonce Feenee The vessel White Orchid has sunk. All passengers have been rescued and are being transported to Sydney Harbor Vancouver Coast Guard Out”

Urgent Call Urgent calls are made on Channel 16 and take priority over all calls except distress calls. Urgent calls are made concerning the safety of a vessel or the safety of a person where assistance is required but where the situation is not one of grave and imminent danger. The words indicating an urgent situation are “Pan Pan” spoken three times. A good example of an urgent call is where is a vessel has run out of fuel, is drifting towards shore and needs a tow. The situation is not one of immediate ‘grave and imminent danger’ but there is some urgency as the vessel is drifting towards the shore.

Another example is where a vessel has not returned to harbor and the Coast Guard transmits a “Pan Pan” to keep a watch for the missing vessel.

Safety transmissions take priority over all other calls except distress or urgent calls. Safety messages are initiated with the words Securite´, spoken 3 times on Channel 16 with the actual message being transmitted on Channel 06 (channel for safety messages). Typical safety messages include notification of hazards to navigation – like a barge adrift.

Weather VHF radios also come with ten weather channels designated as WX1. WX2 up to and including WX10. In Canada, through Environment Canada’s Weather Service, and in the U.S. through the National Oceanic & Atmospheric Administration (NOAA), channels WX1 through and including WX7 are used for continuous weather broadcasts providing current conditions (including wind, waves, swells), forecasts, and severe weather watches and warnings. Always check to see which weather channels are used for your particular area.

In the U.S. you do not need an operators license to use a VHF Radio (Marine). In Canada anyone using a VHF Radio (Maritime) must have a Restricted Operators Certificate (Maritime) – ROC(M) – issued by an accredited agency under the authority of Industry Canada – Spectrum Management, a department of the Government of Canada. In order to obtain a Restricted Operators Certificate (Maritime) you must successfully complete a radio operators course such as the one offered by the Canadian Power and Sail (CPS) organization.

In the U.S. and Canada, non-commercial (i.e. pleasure craft) watercraft meet the station license exemption requirements and do not require a ship station license. Vessels that do have a radio station license will be assigned call signs. A vessel with a name and call sign identify itself by using both – Pacific Princess AV7661. You are not allowed to use a VHF radio on land unless you have obtained a land based station license. (The use of a handheld VHF radio for communication with your boat while ashore is technically in contravention of U.S. and Canadian regulations, however, given the temporary nature of the communications, no enforcement is sought.)

Prohibited Uses Do not use your VHF marine radio for:

Always read the VHF radio manual before using a new radio. This help you understand how to use the radio and take full advantage of the radio’s features.

When transmitting on your VHF radio, always speak clearly and do not rush your words. Do not shout – shouting will only distort your voice. Adjust the squelch so that have just quieted the sound of static.

In distress call situations, the controlling station is the vessel making the distress call, unless control has been assumed by the Coast Guard.

Overheard communication on the VHF radio, unless directed to ‘All Stations’, is considered privileged and confidential information and may not be repeated except in cases of emergency.

Use the internationally recognized phonetic alphabet for isolated letters, groups of letters, to spell out a word or where communication is difficult.

When transmitting numbers say each number separately – 267 is transmitted as Two Six Seven. If letters follow the number, as in a call sign, 267AB becomes Two Six Seven Alpha Bravo.

If transmitting a dollar amount, such as $543.23, this is transmitted as Dollars Five Four Three Decimal Two Three. When communicating time always use the 24 hour clock.

If off shore in international waters use Universal Time (UTC).

If communicating date and time such as July 15th @ 1:30 pm, PDT (Pacific Daylight Time), this would be transmitted as follows: 151330P

Adjust your signal strength for the appropriate range. If you are in a harbor talking to a marina, set your radio for 1 Watt.

If you are in open ocean set your radio for maximum range – 25 Watts. VHF radio signals travel in a straight line. This means that a higher placed antenna will give you a greater range. Land based stations taking advantage of geographical features (high cliffs) can transmit as far as 20 to 25 miles. Ship to ship transmissions have a range of about 10 to 15 miles. Handheld VHF radios have a range of about 5 miles.   Radio Checks

It is important to always confirm that your radio is working. You may be able to receive but that does not mean that you can transmit – often the result of a faulty microphone wire. Call the Coast Guard on one of the Coast Guard channels for a radio check – do not use Channel 16 for radio checks. Since the Coast Guard monitors more than one channel, always indicate what channel you are calling on.

In the U.S. some will say that you are not to call the Coast Guard for radio checks. This is incorrect, the U.S. Coast Guard does allow radio checks: http://www.navcen.uscg.gov/marcomms/boater.htm

There is number scale for the degree of readability (quality of reception).

VHF Channel Usage VHF channel usage will vary from region to region and from country to country. When sailing in unfamiliar waters, check with the Coast Guard, a local marina or other boaters for details of channel usage.

There are some differences in frequencies between the channels used in International waters, Canadian waters and U.S. waters. Most VHF radios sold in North America will allow you to switch between the three regions.

The following is a brief list of common channels used in Canada:

In the U.S., VHF designated channels can be found at the U.S.C.G. website: http://www.navcen.uscg.gov/marcomms/vhf.htm

The following is a brief list of common channels used in the United States:

Sometimes retailers will provide a MMSI number at the time of sale but in most cases you will have to apply for a MMSI number.

In Canada, for pleasure craft, contact Industry Canada – Spectrum Management and use Annex A to apply for your MMSI number, see: http://www.ic.gc.ca/eic/site/smt-gst.nsf/eng/sf08139.html

In the U.S., you can apply for a MMSI number through Boat U.S. http://www.boatus.com/mmsi/MMSI.txt , U.S. Power Squadron http://www.usps.org/php/mmsi/home.php  or through Sea Tow https://secure.seatow.com/boating_safety/mmsi/mmsiRegister.asp

If you know another vessels MMSI number, you can send a digital message directly to that vessel or a group of vessels without it going to any outside party. DSC radios give you options – distress call, urgent call, safety call or routine calls.

You select the nature of your call, the MMSI number of a specific vessel, if it is not a general call, and the Channel you wish to make verbal contact on. The digital message is sent on ‘Channel 70, the recipients radio will sound a noise indicating that a message has been received.

The recipient sends a digital acknowledgement that the message has been received and turns to the channel selected for voice communication.

Using a VHF radio without DSC you switch your radio to Channel 16 and make a distress in the manner we have already discussed. If you are using a VHF radio with DSC you initiate your distress call by activating the DSC distress signal alarm. The alarm button (usually red) has a protective cover that must first be lifted before pushing the alarm. To active the DSC alarm you must hold the alarm button down for 5 seconds. The radio should emit a beeping sound indicating each second – 5 beeps indicates an elapsed time of 5 seconds. The protective cover and requirement of holding the alarm button down for 5 seconds prevents accidental distress signals from being made.

Once the DSC alarm is activated, a digital message is sent on Channel 70. Any station within range having a DSC VHF radio will hear the distress call alarm – a warbling sound. All DSC radios automatically monitor Channel 70.

Upon hearing the DSC distress alarm, a radio operator will see a digital message on the radio’s monitor. The message will carry the distress vessel’s MMSI number, particulars of the vessel (type of vessel) and the nature of the distress.

One great advantage to using a DSC radio is that DSC radios can be used in conjunction with the onboard GPS so that when a DSC distress call is made, it will automatically provide the distress vessels location.

When a vessel in distress activates their DSC distress call, their radio should automatically switch to Channel 16 where they can then send a verbal distress call – Mayday. Not all vessels carry DSC radios and therefore it is very important to send the standard Mayday call on Channel 16 in addition to the digital distress signal sent on Channel 70.